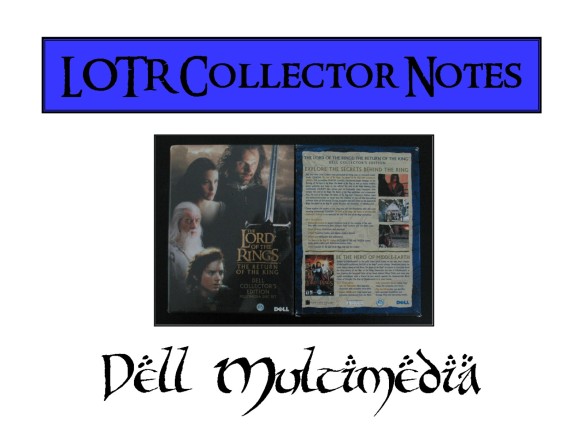 Dell Collector’s Edition Multimedia Set ~ The Return of the King

Multimedia Disc Set for The Return of the King Video Game

In 2003, Dell issued their 4-disc Collector’s Edition for the video game version of The Return of the King. This was in partnership with New Line Cinema and EA Games, which has produced most of the LOTR-related video games.

Three of the four CD discs contain the standard ROTK game. (See the Video Games page for details on ROTK.)

The fourth CD contains multimedia files for viewers to “Explore the Secrets Behind The Ring.” Contents of the multimedia disc include:

Behind the Scenes -a 3-minute feature on the making of the ROTK film, with clips of interviews with Peter Jackson and cast members.